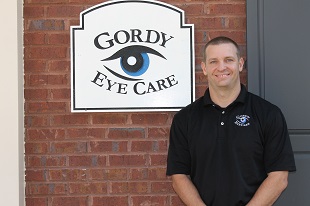 Dr. Griff Gordy was born and raised in Phenix City, AL. He graduated from Central High School in 1994. Dr. Gordy continued his education at Auburn University Montgomery where he graduated with a degree in Psychology in 1999. In May of 2003 Dr. Gordy received his Doctor of Optometry degree from University of Alabama Birmingham School of Optometry.

In 2007 Dr. Gordy left Primary EyeCare Associates and moved back to his hometown of Phenix City to open his own practice. He fulfilled that dream in August 2007 when he opened the doors to Gordy EyeCare.

Dr. Gordy is extremely grateful to be practicing and living back in his hometown. He is always actively involved in the community. He is a board member of the East Alabama Fellowship of Christian Athletes. He is a proud sponsor of the Miss Phenix City Scholarship Foundation along with sponsoring numerous other local schools, groups, and organizations. He also serves as the sideline reporter for his alma mater Red Devils during football season radio broadcasts.

Dr. Gordy is married to the beautiful Jennifer Rae Gordy formerly of Prattville, AL. They have been married for 6 years and have 3 boys, Evan (4 years), Lucas (6 months old) and Noah (6 months old). They attend Summerville Baptist Church where Dr. Gordy serves as a deacon and also teaches the College and Career class. 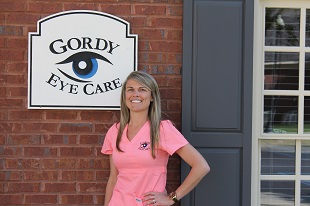 Jamie Foster is our Office Manager. She has been at Gordy EyeCare since April 2012 and has worked in the optical field and Optometry setting for over 14 years now. Jamie believes in customer service as her number one priority and will be more than willing to help you with anything she can. Along with being the Office Manager she is also our Licensed Dispensing Optician. She graduated with her degree in Science of Opticianry in 2007. She specializes in fitting patients with precise measurements during the fame selection process. She loves working with patient's one on one and finding the perfect frame and appropriate lens for any lifestyle! She can also help you with any type of adjustment and do just about any type of lab work that needs to be done. She is here to help you with all of your needs as an Office Manager as well as an Optician.

Jamie is from Beauregard, Alabama where she currently still lives. Jamie and her husband, Justin are the proud parent's of an amazing 5 year old little boy, Carson. In her spare time she enjoys shopping, spending time with friends, hanging out with her sweet little Carson and Auburn football, WAR EAGLE!!!!! 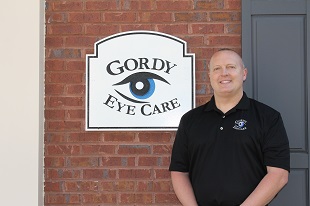 Jimbo Smith has had the pleasure of serving in the field of Ophthalmology and Optometry for over 22 years. He received his certification in this field as well as his degree in Medical Management in December 2001. He is very excited to serve the community at Gordy EyeCare and looks forward to meeting you very soon!

Jimbo is married to his lovely wife Christie who is a teacher at West Smith Station Elementary School. He has three beautiful daughters, Kaylee, Joah and Jayme. He played football at Central High School where he graduated in 1993. In his spare time he enjoys spending time with his family, fishing and watching the University of Tennessee football. 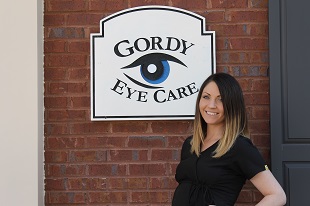 Katie Hagan is the smile you see as soon as you walk through the front door at our office and is one of our newest employees. She is here to verify your insurance, schedule appointments and much more.

Katie was born in Fort Benning and raised in Columbus, Georgia. Katie graduated from Northside High School. She loves to spend time with her son, Emory, and is expecting another in October. Katie dedicates her time chasing around her son, but enjoys relaxing days by the pool and if she's lucky the beach. Don't get this sun bunny confused, her perfect day is eating junk food and watching Netflix. 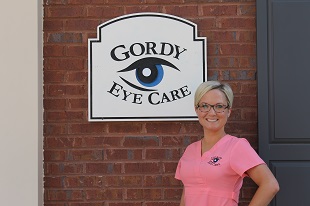 Kaitlyn Guthrie is our check-out receptionist. She strives daily to have the best customer service possible, and you will always receive that experience with a smile from her. Along with her responsibilities she can also help you schedule appointments and check you out promptly. She thoroughly enjoys helping patients with their needs in any possible way.

Kaitlyn is from Columbus, Georgia. She enjoys spending time with her son, Colton, and also her husband, Clay. She is a member of the Fort Church and spends a lot of time with her church family when she isn't working. Kaitlyn is also a huge Auburn fan, War Eagle!! 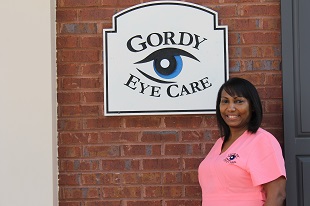 Traci Method was born and raised in Columbus, Georgia. She graduated from Hardaway High School and received her B.S. in Health Care Services in 2009. Traci has 17 years of experience working with Ophthalmologist and Optometrist practices.

Traci is an active member of South Columbus Methodist Church. She serves on the board for a local non-profit organization Changing Faces Within, Inc. In her spare time, Traci enjoys fishing, bowling and spending time with her two grandchildren. 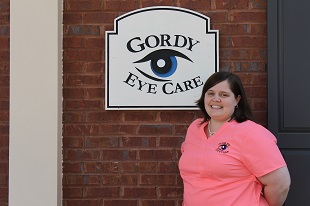 A.J. Culpepper is the newest addition to the Gordy EyeCare team. She brings with her over a decade of customer service experience in regards to insurance. Her goal is to get you the maximum benefit available through your health coverage.

A.J. is a Phenix City native and graduated from Smiths Station High School. She met her husband, Curtis, in 2006, and they have a son named Mikey. In her free times, she enjoys family-time, reading, baking and anything Pintrest-worthy!

We look forward to hearing from you. Please provide any special instructions or appointment preference times the box below.